Welcome to Inward Jew Nation Site for the Emancipation of Mental and Spiritual Enslavement!

Happy New Year, Beloved Readers! This is our Fourth Moment of Coffee/Juice Break Chat in 2k17 so I  will name it Guy Chat #3:02-06 Please reach for your Bible (Sword) a

“Blessed be the God and Father of our Lord Jesus Christ, who hath blessed us with all spiritual blessings in heavenly places in Christ: according as He hath chosen us in Him before the foundation of the world, that we should be holy and without blame before him in Love: having predestined us unto the adoption of children by Jesus Christ to Himself, according to the good pleasure of His will, to the praise of the glory of His grace, wherein He made us accepted in the beloved; in whom we have redemption through His blood, the forgiveness of sins, according to the riches of His grace.” [Ephesians 1: 3-7]

Africa and African Descendants and all Nations, the way forward to Success, Salvation, Freedom and Life is to embrace the Kingdom of God and of Christ, and obey its principles to the end!

Beloved, in as much as there are so many people, tribes and nations in the world they fall under two main categories, namely, (1) the kingdoms of this world [1 John 2:15-17]: and (2) the kingdoms of our Lord and of His Christ. [Revelation 11:15]

Agents of the temporary kingdoms of this world influenced by the satanic spirit world [Ephesians 6:12] have been for centuries marginalizing, dehumanizing, enslaving and dividing peoples and tribes and nations to satisfy their greedy selfish political and economic goals and also to acquire maximum social control of nations in ways more than one. For example, the “Scramble for Africa was the invasion, occupation, division, colonization and annexation of African territory by European powers during the period of New Imperialism, between 1881 and 1914. It is also called the Partition of Africa and the Conquest of Africa.” 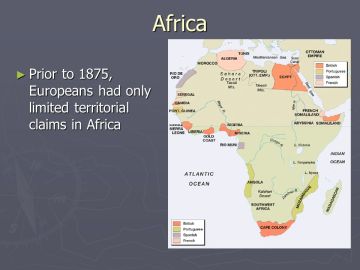 It is noteworthy that, “In 1870, when the European powers were bickering among themselves about the spoils (of Africa) only 10 percent of Africa was under European control,” and this was only along the coast of Africa. However, since they were not satisfy with their coastal occupation and control they wanted all of Africa and, “To prevent further conflict between them, they convened at the Berlin Conference of 1884-1885 to lay down the rules on how they would partition up Africa between themselves. And by 1914 it (European Control of Africa) had increased to 90 percent of the continent, with only Ethiopia (Abyssinia), the Dervish state (Present day Somalia) [1] and Liberia still being independent. (https://en.wikipedia.org/wiki/Scramble_for_Africa)

According to Bob Gelfdof, “To establish a type of nationwide government, [European] colonial administrators effectively set about inventing African traditions for Africa that would make the process more acceptable to the indigenous population…. “In Zambia”, for instance, the chief of a little known group once remarked, “My people were not Soli until 1937 when the Bwana D.C. told us we were. The concept of the Zulu as a discrete ethnic group did not emerge until 1870.”

Interestingly, while the continent of Africa has been trapped in Tribalism, (among other things) which is an European created designed and continuing culture of colonization to keep the Africans on the Continent divided as a people: African Descendants in the Americas, have inherited a legacy from the Plantation of which our Ancestors worked as slaves for about four (4) hundred years before they gained full emancipation Wednesday, August 01, 1838. This legacy, from which all, who believe, must be set free, by the power in JESUS’ name, is the New Form of Slavery of the mind, with its long lasting devastating effects to this date.

Now concerning Africa, it is noteworthy that “by creating an image of Africa steeped in unchanging tradition the colonizers condemned the continent to live in a reconstructed moment of its past.” As a result, “The freedom from imperial powers was, and is still, not a smooth transition. The natural struggle to rebuild is proving difficult,” said Professor Richard H. Robbins for Africa.

The Way Forward to Success, Salvation, Freedom and Life

“The natural struggle to rebuild is proving difficult for Africa” because she cannot be rebuilt through a mere natural struggle, moreover with an enslaved mindset of Tribalism period. The key to success for the rebuilding of a New Africa is:

It is written: “For we wrestle not against flesh and blood, but against principalities, against powers, against the rulers of the darkness of this world, against spiritual wickedness in high places.” [Ephesians 6:12]

Amazingly, a related event for a Christ Created New Image of Africa steeped in His kingdom principles was handed down to our Ethiopian eunuch brother at Gaza since A.D.33-34 i.e. roughly 1836 years and 1880 years before the Europeans gained the 10 % coastal, and the 90 % inland control of the Continent of Africa respectively.

Truly, our Ethiopian Brother’s conversion to Christ through purely divine intervention at that level is an experience and Legacy Africans and African Descendants must acknowledge and embrace wholeheartedly. Besides, we should always tell our children about it and thus transmit to our future generations our heavenly Father’s love for us and for the conversion of the Continent of Africa to Christ.

Our claim is scriptural, sound and thus authentic

Our Ethiopian brother “a eunuch of great authority under Candace queen of the Ethiopians had  an encounter with our heavenly Father the Most High, at Gaza which was desert. [Acts 8:26-39, A.D.33-34] In a nutshell, Almighty God miraculously took Philip the Evangelist, from Samaria where he had preached the pure Gospel of Jesus Christ and baptized all who believed “into the name of the Lord Jesus,” [Acts 8:5-17] to the desert at Gaza to meet one man and he “preached unto him JESUS.”[Acts 8:35] Following this they went down both Philip and the eunuch into the water and he baptized him. And when they were come out of the water, the Spirit of the Lord caught away Philip, that the eunuch saw him no more: and he (the eunuch) went on His way rejoicing.” [Acts 8:38-39]

My theory on the attitude of an enslaved mind

If a mind is conditioned to defend and work for any administration interested in the continuation of its binding systems and policies: then it (that mind) cannot under the sun create anything of its own outside of the box, since it is not made to think for itself, — save and except by a miraculous transformation the mind is renewed, spiritually guided and empowered by a higher power.  —by Wilfred A. Wilson

According to Kingdom Principles, the will and purpose of Almighty God, it is written, “Except the Lord builds the house, they labor in vain that build it: except Lord keeps the city, the watchman waketh but in vain.” [Psalm 127: 1]

Therefore, if Yahweh the Most High is allowed to rebuild Africa and all the other nations worldwide, and if all who believe that He can; allow Him to reconcile us all to Himself through Christ, then we should all have His sound mind, a common vision and long term plan of Salvation to follow and work with, and His relevant strategies to liberate first, ourselves as individuals, and then the Nations worldwide.

One such Nation for Liberation and rehabilitation in union with Christ is, for example, Africa, its divided people and tribes on the Continent through the European legacy of Tribalism, among other things, and African Descendants in the Diaspora, which I also bring under spotlight on this Site.

A needed strategy to eliminate Tribalism and other ungodly traditions contrary to the Most High is to sensitize all about Almighty God’s Kingdom Principles and Blessings for the Liberation and successful rebuilding of a New Africa in Christ which guarantees the salvation, restoration of peace, love and unity among the tribal divided and mentally captivated people.

Concerning the Principle of the Kingdom of God and of Christ for Africa’s Liberation, they would help Leaders and Elders of the people, who from the heart believe them, to think outside of the box, and seek Almighty God for: wisdom and understanding, guidance and insight into the Word, strategies to implement for a healthier and prosperous society, better governance and justice for all and sustained economic development and more freedom to preach the simple pure Gospel of Christ to affect inward change of the hearts and minds of those, who would believe. It is written:

“If my people, who are called by my name should humble themselves and pray, seek my face, and turn from their wicked ways; then will I hear from heaven, and will forgive their sin, and will heal their land.” [11 Chronicles 7:14]

I close with my poem entitled:

Should all the African tribes come together as one in Christ,

What a great tribe we should be.

And if all Nations and tribes worldwide come under Christ

The Lion King of the tribe of Judah,

What a righteous and peaceful world we should be.

And when we rock with a roar and all heaven roar back,

Our mighty thunder like roar would shake the heavens;

—by Pastor: Elder Wilfred A. Wilson

Well our time is up

Well, our time is up. It was a pleasure sharing with you spiritual things on Moment of Inner Change Coffee/Juice Break. See you at our next MIC Coffee Break Chat, with Redeeming Luv. May God richly bless you. Shalom.
Yours in His love,

1. I am a preacher with a vision; and an inspired message of Emancipation for the mentally and spiritually enslaved by the precious Blood of Christ. [1Peter 1:18-19; Romans 6:17-18] 2. I am a God-fearing Guyanese of African descent, and my name is Wilfred A. Wilson, Pastor/Founder of The Inward Jew Nation of God Ministries, INC., in Guyana, South America. Inspired by Romans 2:29, I registered this pioneering work in that name because to live one's life of a Jew inwardly in union with Christ is a distinguished daily lifestyle among Yahweh's New Creation in Christ, in obedience to His infallible Word. [Romans 2:29; Ephesians 1:3-5] Besides we identify with Yahweh's seventh (7th) day "Rest" at creation. We are non-denominational, indigenous, autonomous and self-propagating. Since in September 2012, with new inspiration from Romans 2:29, I became very conscious more than ever of whom I am in Christ, and declared publicly that, I am a Jew inwardly, because of my change of heart i.e., by the power of the Holy Spirit. [Romans 2:29, 3:21-22, 23-25; Colossians 2:9 -13] Subsequently I shared my experience with my already established group and we embrace Romans 2:29; and according the WORD, we moved to the next level as led by the Spirit: and registered our group with the Style and Title, "The Inward Jew Nation of God Ministries, INC. in Guyana, South America. MY ENCOUNTER WITH CHRIST I came to grips with Jesus/Yeshua in the early 70s, and through YAHWEH'S mercy, and by His grace; He saved me, called me and put me in the ministry. Thus, after completing intensive ministerial studies, I was ordained on November 10, 1976, and I served the Church (Sunday Worship) as Pastor for many years: until I was inspired to establish a Nondenominational Independent Church in union with Christ that would also identify with Yahweh’s seventh day “Rest” at creation. 3.. Also, I am a positive thinker; inspired preacher and father of two children - both are females. Currently I am pursuing private studies…. Contact Email Address: mybodyatempleofyahweh@yahoo.com View more posts